On April 8, 2020, the IRS released Revenue Procedure 2020-23 which enables eligible partnerships to file amended returns for 2018 and 2019 rather than having to file an administrative adjustment request (AAR).

The reason for this guidance is to allow eligible partnerships to take advantage of the Coronavirus Aid, Relief, and Economic Security Act (CARES Act) tax relief for the year being adjusted (2018 or 2019), rather than delay the relief until the year the AAR is filed. Prior to this Revenue Procedure, if a BBA partnership had an adjustment to a previously filed return beginning in tax year 2018 or later, it was required to file an AAR. In most cases, the partners of the partnership would then reflect those adjustments in the year the AAR is filed, rather than in the year being adjusted. Without this latest guidance, partners would not have been able to take advantage of the tax benefits of the CARES Act until, most likely, 2021 when the 2020 partnership return is filed.

BBA Partnerships that have filed form 1065 and furnished all required Schedules K-1 for the taxable years beginning in 2018 or 2019, prior to April 8, 2020, may file amended partnership returns for those years prior to September 30, 2020.

This is significant to the Low-Income Housing Tax Credit Industry because the legislation states that “The amended returns may take into account tax changes brought about by the CARES Act as well as any other tax attributes to which the partnership is entitled by law.” This means that any eligible partnership receiving IRS Form(s) 8609 prior to September 30, 2020 would be able to amend a previously filed partnership return to claim credits in the 2018 tax year. The partners will then be able to receive the benefits immediately  rather than in 2021 if an AAR had to be filed.

If you have any questions regarding this information, please feel free to contact Elizabeth Harriger, CPA, Partner & Director of Affordable Housing Services at McKonly & Asbury at eharriger@macpas.com or by calling (717) 972-5727.

As further changes develop, we’ll continue to keep you informed. Be sure to check back to our COVID-19 Resource Center for additional information and updates.

Partnership Taxation: Who Owns Me? Who Do I Own?

The IRS Form 1065, U.S. Return of Partnership Income, is the tax return that partnerships must file annually. Beginning with the 2009 tax year, partnerships are required to answer two new questions when filing Form 1065.

These two questions essentially ask for a “chain of ownership” involving the partnership. On the surface, these questions would appear straight-forward. However, in addition to looking at the direct ownership, you need to look at the constructive ownership rules. These rules are defined in Internal Revenue Code Section 267(c); we’re not going to recite them here, but basically, you must look “up and down the chain” of ownership in entities and you must also look at family relationships. These concepts are best illustrated through some examples: 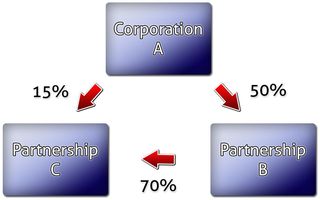 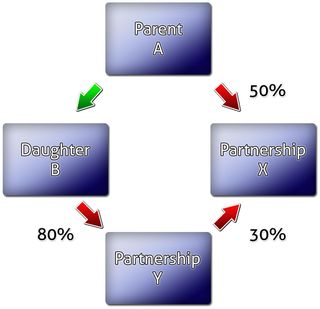 What all this means for partnerships looking to complete their 2009 tax returns in the coming months is that they will need to look at not only their direct owners but also ask questions about who owns their partners or who is related to their partners as well as what do they own. Feel free to contact Jane McCurdy at jmccurdy@macpas.com for additional information.

Why Am I Getting This Notice From PA?

Many Pennsylvania partnerships have received notices from the Pennsylvania Department of Revenue (PA DOR) during the past week. These notices are from the PA DOR’s Pass Through Business Office and are notifying partnerships of their obligation to withhold corporate net income tax on their non-filing corporate partners. This obligation was created when the 2003 Pennsylvania legislature passed Act 46 of 2003 and basically requires a Pennsylvania partnership to make estimated corporate net income tax payments on behalf of their corporate partners unless specific conditions are present. There was never much enforcement activity on this requirement until last year. In November 2008 we saw the first round of notices, and now this November we are seeing a second instance of notices.

Continue reading "Why Am I Getting This Notice From PA?" »

McKonly & Asbury's team of CPAs and Business Advisors serve clients from our offices in Camp Hill, Lancaster, and Bloomsburg. To learn more about the services we offer, visit us at www.macpas.com.